The attack on Olsen came after the Premier League and English Football Association had called on clubs to do more to stop supporters encroaching onto the field on Friday.

The City fans had run onto the pitch after a dramatic fightback saw their side retain the title.

City looked set to hand the crown to Liverpool as they trailed 2-0 with 14 minutes remaining.

But subsitute Ilkay Gundogan struck twice in five minutes either side of Rodri’s strike in a remarkable late rally.

In a repeat of ugly scenes when Everton secured their Premier League survival on Thursday, supporters spilled onto the pitch both after the winning goal and in greater numbers at full-time.

“No is the answer to that,” said Gerrard on whether his players escaped unhurt.

“My goalkeeper was attacked and I think those questions should go to Pep (Guardiola) and Manchester City. We’ll go and check if he’s ok now.”

City apologised to Olsen and promised to launch an immediate investigation.

“Manchester City would like to sincerely apologise to Aston Villa goalkeeper Robin Olsen, who was assaulted after the final whistle at today’s match when fans entered the pitch,” City said in a statement.

“The Club has launched an immediate investigation and once identified, the individual responsible will be issued with an indefinite stadium ban.”

The crossbar at the end where City scored their goals was brought down by the weight of fans climbing on it.

The attack on Olsen is the latest in a series of worrying incidents involving fans and players and coaching staff.

Merseyside Police opened an investigation after Crystal Palace manager Patrick Vieira was seen to kick out at an Everton fan who taunted him on Thursday.

There were also scenes of disorder at Port Vale on Thursday, with Swindon manager Ben Garner saying his players were “physically and verbally abused” after their League Two play-off semi-final defeat. 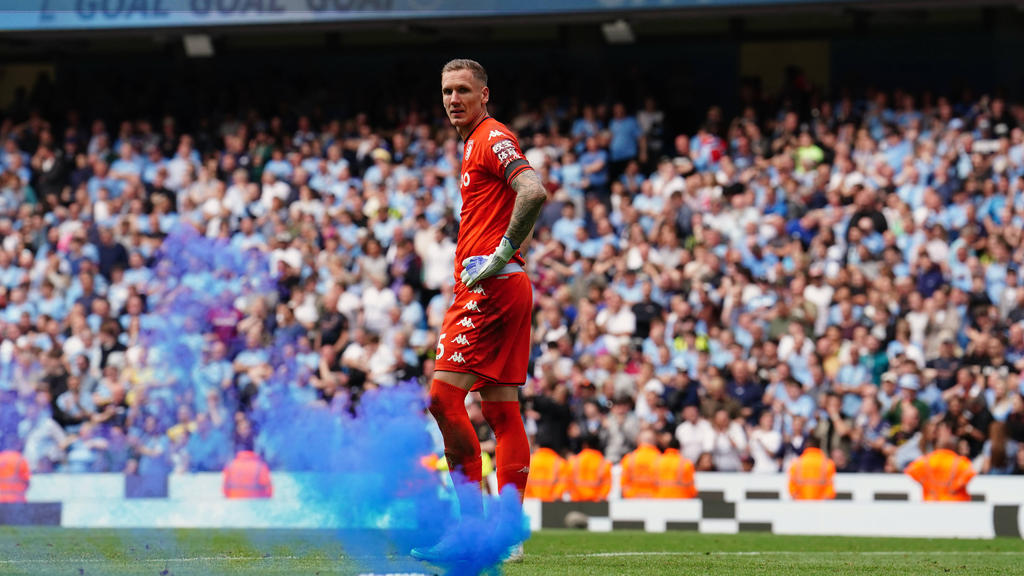